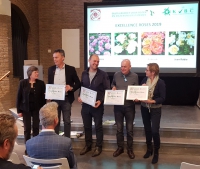 During the annual meeting of the Cultuurgroep voor Rozen en Rozenonderstammen, which took place on 14 February at the Koninklijke Van Ginkel Groep in Veenendaal, 4 certificates were awarded from Excellence Roses. Helma van der Louw, chairman of the KVBC, handed out the certificates.

The Cultuurgroep voor Rozen en Rozenonderstammen has transferred the organization of the trials and processing of the results of Excellence Roses to the KVBC at the beginning of 2018. Anthos provides the secretariat for the Cultuurgroep. The four roses have passed a triennial trial on five rosaria in the Netherlands and Belgium. Rosaria trial committees approve the roses at four fixed times of the year and apply fixed criteria in areas such as vigor, health, flowering richness and fragrance.
The four Excellence Roses
The three breeders (1 breeder received 2 certificates), or their representatives, were present at the annual meeting to receive the certificates. The new Excellence Roses are the tea hybrid ROMINA (“Tan09564”) from Tantau, the shrub rose TAXANDRIA (“Viscampina”) from Vissers and the floribunda roses AIRBRUSH (“Korgetcali”) from Kordes and JEAN ROBIE (“Vismarok”) from Vissers. 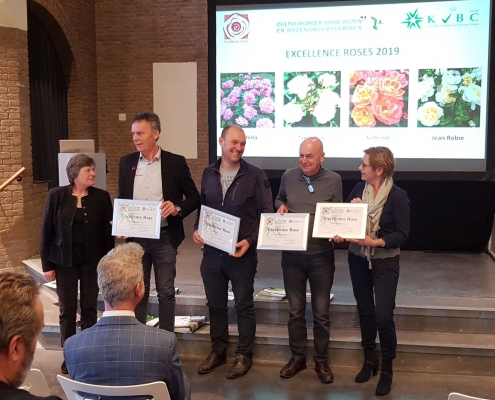